Free Ground Shipping on orders over $100.00* (See Terms)
CODY RAHDERS CONTINUES TO GO STRONG -- AND IN A GREAT POSITION TO TAKE THE CHAMPIONSHIP On a day with temperatures in the high 90's the racing at Race Town 395 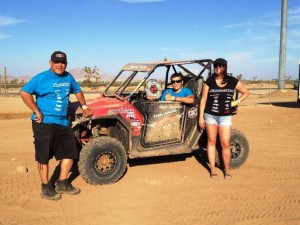 was just as hot. 30 cars lined up in the combined Production 700/850 class with 9 of those entry's in class 700 alone. Cody lined up in row 4 in his Polaris RZR570 and when the green flag flew for his group he rounded the first turn second to last. "I got a good jump on the start but got pulled down the start straight. Its a 45 minute race, I could have drove it in to the first turn hard to get a better position but that's a big chance to take, better to be patient." Through the motocross section and out into the desert the order remained the same but when the group returned from the desert section Cody had gone from 8th to 4th and by the end of lap one he was in 3rd. As the top three headed back into the desert the call came over the radio, "The dust is so bad I cant see a thing!" and upon returning form the desert section a portion of his front bumper was gone. "I thought Havasu was bad, this was the roughest, dustiest race I've ever done. It was either stay right on top of the car in front of you or back off and lose them in the dust....looks like I got a little too close." He said pointing at where the top portion of his front bumper used to be. The top three were within 10 seconds of each other starting lap three and by the time the group returned from the desert section the leader had rolled putting Cody in second. "Once we got back to the motocross section I really started to push, I was right on top of the leader about to make a pass and bicycled the car. I was over so far I could have reached out and touched the ground, it was the save of a lifetime....and no one saw it." Starting lap four Cody had gone from bumper to bumper with the leader to 15 seconds back and as they returned from the desert section for the last time he was within 10 seconds and finished it out second place in class and seventh place overall. "Once the leader was out in front of me by a few seconds It was so dusty I couldn't see anything and was beating the car to death because of it. At that point it was better to finish so I decided to just check up, hoped for a mistake, and take second." Cody Rahders Racing and R3motorsports would like to thank the following for their support: Polaris Industries Cognito Motorsports UTVunderground.com [1] Team Alba Racing Fox Racing Shox Pro Armor Black Rhino Performance Mystik Lubricants Benchmark Performance RacerX Motorsports And our personal sponsors Superchips K&N Filters Diffenbaugh Construction Frosty Burger Pine Valley and SuperLite Championship Next race, may 19th and 20th at LOORRS in the #16 SuperLite, check Cody Rahders Racing facebook page for updates. Doug Rahders _R3motorsports_