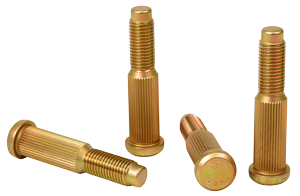 There are other replacement wheel studs on the market, but they don’t address the real engineering issue – they aren’t strong enough.

That’s why we worked with the fastener experts at ARP to engineer and manufacture a wheel stud that will handle a ton of use and abuse. ARP re-engineered the stud with a 35% larger diameter in the critical area from the rotor to the hub face. In addition, ARP’s studs are made from 8740 chrome moly and heat-treated to a nominal strength of 180,000 psi – significantly stronger than cheap grade 8 replacements.

These replacement wheel studs require a 16mm x 2.0 tap and minimally drilling out the brake rotor, but the end result is much stronger than OEM and other aftermarket studs. In the image to the left, you can see the dramatic difference in the stud diameter between the ARP threaded stud and the OEM stud. (Tap and drill bit sold separately.)


If you’re on a tighter budget, but still want the strength of ARP fasteners, we also offer an ARP knurled stud that fits your hub without any modifications. These studs are easier to install, but still have the 35% larger diameter between the rotor and the hub face.

Both ARP studs are cad-plated to help protect them from the elements.

If you want to keep breaking studs and getting stranded, keep using the cheap replacements.
If you want real strength, upgrade to ARP wheel studs.
Availability:

Sold per wheel. Select QTY-4 if you need them for a complete vehicle