Due to COVID restrictions in the shop please expect 2-3 business days for your order to be shipped. Thank you for your patience! 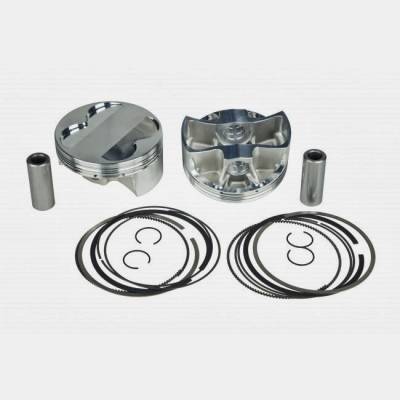 Alba Take: The history behind the piston, and why CP is our piston of choice. The Calvert brothers started at Arias Pistons back in 1972. In 1978 they went on and joined JE pistons, and carried on there for 20 years. In 1998 JE was sold to Dover Corp. which also owns Wiseco and Pro-X. The Calvert brothers at this time decided it was time to start their own company. They started CP pistons with several engineers from JE, and never looked back. After just a couple of years CP piston had new designs that crushed JE in strength and weight. In the year 2001 we made the switch from JE to CP while testing Raptor 660 pistons. We had many problems with our Raptor 660 pistons cracking above the pin in long endurance races. We spoke with JE and they were well aware of the problem as many were having it. Their answer was it is good enough for most so, why fix it. We then approached CP with our issues and a new piston was born with x bracing under the pin, and the problem was solved. Since then we have been a CP only shop. CP continues to make a better piston while others choose to stay with good enough, and for some good enough is not good enough.